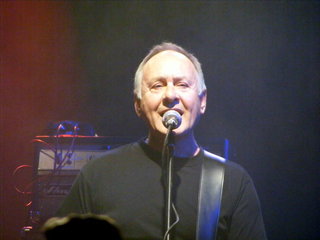 “When I was at school in a ‘very exclusive’ college about six of us used to spend lunchtimes, and recesses, belting away on guitars in a tiny locker room” - Chris

From the age of 15, Bailey began playing bass guitar with various Adelaide bands. His earliest group was Tattered Sole, which he formed in 1966 while still at school, with James Ashby (guitar/vocals), Rick "Fred" Frolich (lead vocals), Rob Tillett (lead guitar/vocals), and Bob Wiltshire on drums.

“The band used to practise on weekends and whatever spare time we could get. And we started playing for friends at parties and dances. On Saturday nights, instead of going to the movies like good little college kids, we would sneak off and play rock and roll.”

“I flunked my first year at university, and by the stage we were calling the band Red Angel Panic. I was getting more into the band, and less into university.” Australian musicologist Ian McFarlane described the group's style as "psychedelic/cosmic blues rock" and they were "one of the first outfits of the day to espouse a social and political agenda.”

“We got involved with unions and did a gig at a demonstration on the steps of State Parliament. All the left-wingers and anti-Vietnemmers were on the steps with us, and all the RSL and national servicemen were on the street screaming abuse. We played on, dodging sticks and bottles.”

Bailey was recorded on Red Angel Panic's first single, "Viet Rock"/"Private Investigator" (late 1970) and a number of so far unreleased recordings between 1970 and 1977, which were remastered and released in 2015 (some of these previously unreleased Red Angel Panic tracks are now accessible on SoundCloud). Chris left Red Angel Panic in 1971 but did return in 1975. “I split from Panic, and [Peter] McCormack and I formed a band to go on “The Incredible Bus Trip” with Russell Morris. We had four rehearsed numbers.”

It was at this time that Bailey became close to Mauri Berg and Joff Bateman who were also on the tour. In February 1971 Bailey formed Headband with Joff Bateman on drums, Peter Beagley (later known as Peter Head) on keyboards and lead vocals, and Mauri Berg on guitar and lead vocals. McFarlane described this group's style as "progressive/blues rock.”

They disbanded in 1974 and, in March the next year, Bailey issued a solo single, "Sunday Too Far Away" on RCA. Bailey rejoined Head in Mount Lofty Rangers, an "ad hoc country rock outfit", which had a variable line up including Bon Scott. During 1975 Bailey hosted a music TV series on Australian Broadcasting Corporation (ABC), Solid Air. Between 1975 and 1977 he rejoined Red Angel Panic and recorded quite a number of tracks with the band. He had a short stint with another band, Salvation Air Force.

In 1976 he joined pub rockers The Angels with Graham Bidstrup (aka "Buzz Throckman") on drums, John Brewster on rhythm guitar and vocals, his brother Rick Brewster on lead guitar, and Bernard "Doc" Neeson on lead vocals. During New Year's Eve 1979, The Angels performed on the Sydney Opera House steps, where Bailey and Neeson both received head cuts requiring stitches from bottles thrown by the audience. Bailey left the band early in 1982 after working on their first five studio albums.

Bailey worked with a range of artists including Gotham City (with former band mate Rob Tillett in 1982), PM, Invisible Men, Wendy Saddington Band, The Famous Nobodies, and Rat Tat Tat. During late 1983, Bailey was living in Sydney and was approached by ABC to join a song writing team working on a TV pop music drama, Sweet and Sour. Bailey co-wrote tracks with Bidstrup and Mark Callaghan and together they formed a pop rock group Gang Gajang, with Geoffrey Stapleton (ex-The Aliens) on keyboards, guitar and vocals. Bailey remained with the group until his death. Periodically from 2001 he also performed in various line-ups of The Angels.

Just prior to his death, Chris Bailey married his partner Josie O'Reilly, an actor-comedian with whom he had a son. In January 2013 Bailey was diagnosed with mouth/throat cancer. The Angels confirmed his condition with a media release in January 2013.

"[We] are deeply saddened to learn that our bass player Chris Bailey has an aggressive, life-threatening cancer and is now undergoing palliative chemotherapy” – The Angels

Bailey died of the disease on 4 April 2013, aged 62. A tribute concert, Adelaide Salutes Chris Bailey, was held in his honour on 17 April with proceeds donated to his wife and son. The performers included Jimmy Barnes, Ian Moss, Phil Small, and Don Walker (all of Cold Chisel); James Reyne; his own band Gang Gajang; Swanee with The Brewster Brothers; and The Angels with Dave Gleeson (of The Screaming Jets).