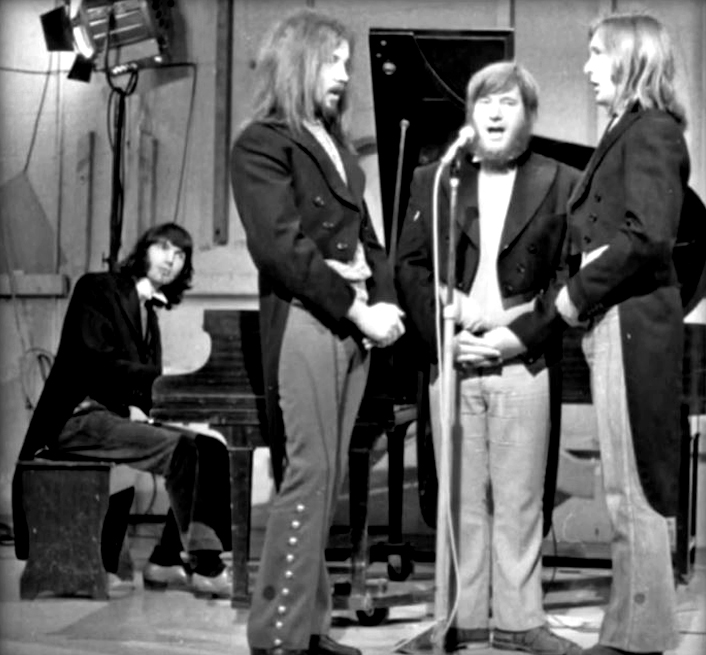 Headband had a strong work ethic, rehearsing and performing constantly, including three shows a week in high schools across Adelaide. “We did modern jazz at nightclubs, rock ‘n’ roll for discos, J.S. Bach for pleasure, barbershop quartet stuff for laughs, electronic music at jam sessions, blues when feelin’ low, and country and folk for interest. A combination of these influences comes out in our original material,” explains Peter.

“We have to work overseas, and mainly do concerts” - Peter 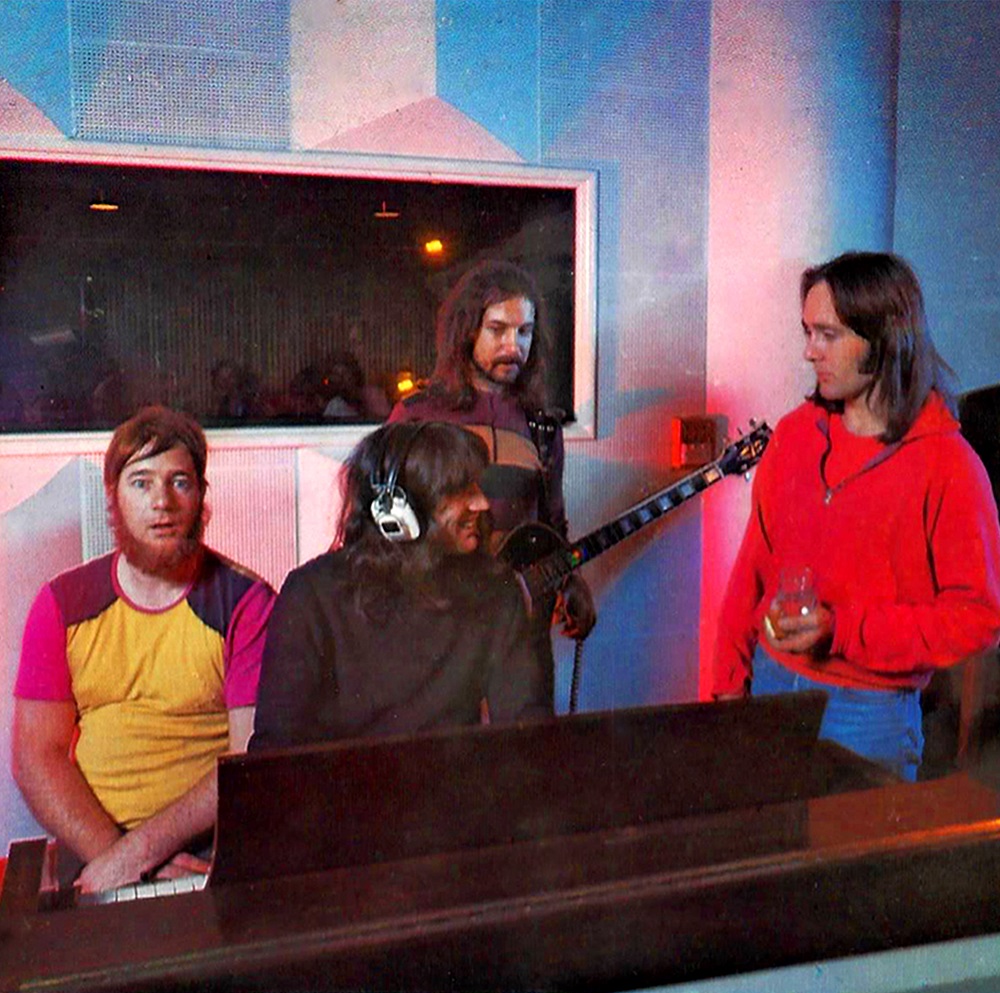 The band practised “group indoctrination” in all types of music, even attending chamber music concerts together. The four-piece group have supported musical legends such as Elton John in 1971 at his Adelaide show at the Memorial Drive Tennis Centre, and The Rolling Stones in 1973 at their Sydney performances. They also finished third in the July 1972 Hoadley’s Battle of the Sounds – a national performance competition between the best groups representing each state, having been a finalist the year prior.

“I think if we can get to play our own stuff properly, in concert, with orchestras and the full treatment, that will be the ultimate” - Mauri

Mauri was responsible for most of the band’s compositions, with Peter, Chris, and Joff helping out on arrangements. Headband produced a song each week in their most prolific period. Their dedication to musicianship and creative work won the admiration of many fellow musicians. They released four singles and toured with the Rolling Stones and Mainline, but regard the album “A Song for Tooley” as their real beginning.

Their debut single, "Scratch My Back" was released locally by RCA and did not reach the charts. It was straightforward pop and was followed by their second single, "Land of Supercars", which was issued nationally in 1972. "Country Lady" was also released that year. 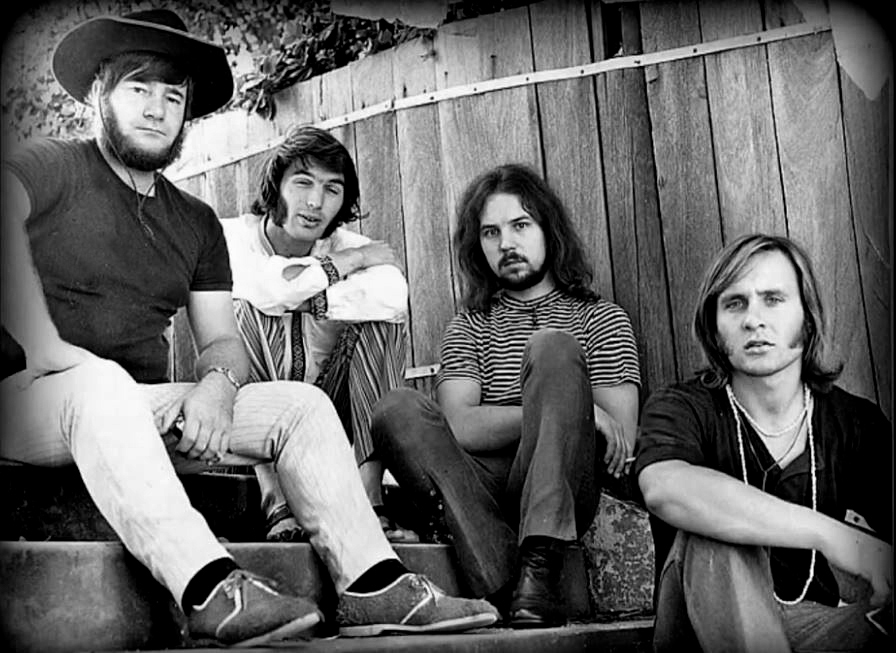 Headband issued "A Song for Tooley" as their next single. Their debut album of the same name was released in September 1973 on Polydor. It featured hand-drawn album artwork by internationally renowned Adelaide artist Vytas Šerelis, who created promotional posters and photos for Headband, Fraternity, The Mount Lofty Rangers and Chequers. The album also featured a foldout poster with photos and biographical details of the band members. Its "sound was more adventurous [but it] was erratic, with the material ranging from Uriah Heep-styled heavy rock to psychedelic pop and progressive jazz". It featured Sydney Symphony players and a 110-piece children's choir. The album spent five weeks in the charts, making the top 50.

Headband relocated to Sydney in 1973, playing the pub circuit with residencies at Whisky a Go Go. They toured Australia supporting international acts The Rolling Stones, Elton John and John Mayall. In 1974 they returned to Adelaide and disbanded.

“I think we are desiccated enough, or stupid enough, to believe a band which sticks together can make it. I want to make it, because I want to be part of something that has contributed to history. A recognised band can change the course of music, the people, or even the whole world” - Chris

After Headband had separated, Chris Bailey joined Australian rock group “The Angels” in January 1977. He was later a founding member of GANGgajang. Mauri Berg joined a new line-up of Fraternity in late 1974. It included John Swan on drums and vocals and his brother Jimmy Barnes (Cold Chisel) on vocals. Peter Head formed a loose musical collective, The Mount Lofty Rangers in 1974, which began with various musicians from Fraternity and Headband. It included notable Adelaide musicians such as Glenn Shorrock, Robyn Archer and Bon Scott, who later joined AC/DC. The Mount Lofty Ranges spawned the musical “Lofty” produced by The Circle Theatre Company. In 1996, Peter set up his own label Head Office Records alongside radio broadcaster David Woodhall. They produced two CDs: "Round & Round & Round" by Bon Scott and Peter’s first solo CD recording "King of the Cross". 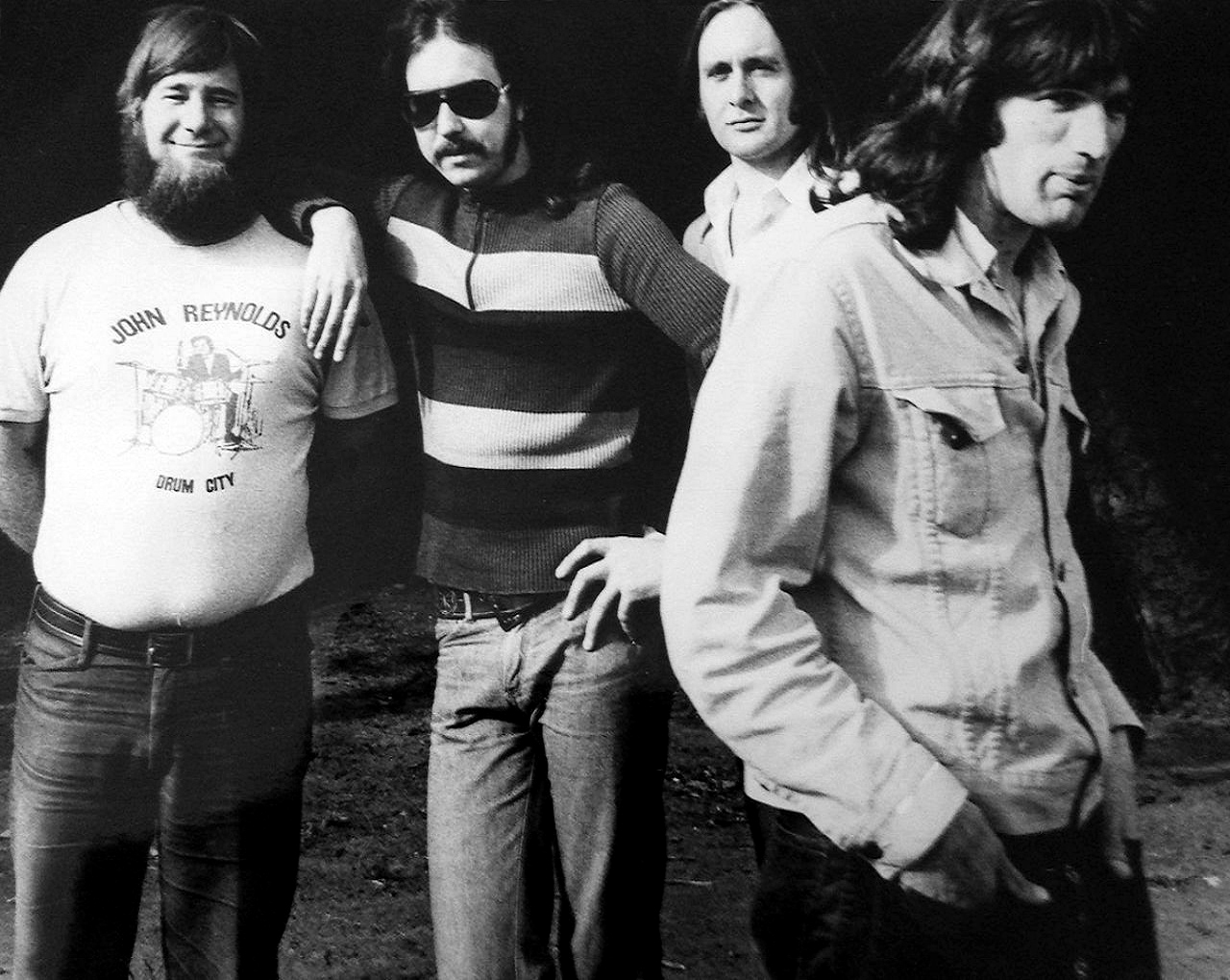 By the early 1990s, the original vinyl pressing of “A Song for Tooley” became a collector’s item for psychedelic and progressive rock fans. Fast-forward to 2011 and Peter Head with Head Office Records signed to Blue Pie Records, to remaster and digitally distribute all the psychedelic rock material from Headband. In 2012, Headband released their single “A Song For Tooley” as a remastered version. In April 2016, Headband was inducted into the South Australian Music Hall Of Fame at The Goodwood Institute in Adelaide.

Headband’s progressive, psychedelic folk music creates a similar ambiance to that of Simon and Garfunkel, The Beatles and The Rolling Stones. Their music brings a sense of nostalgia and peace.

Headband Bio can be downloaded by clicking on the image below: 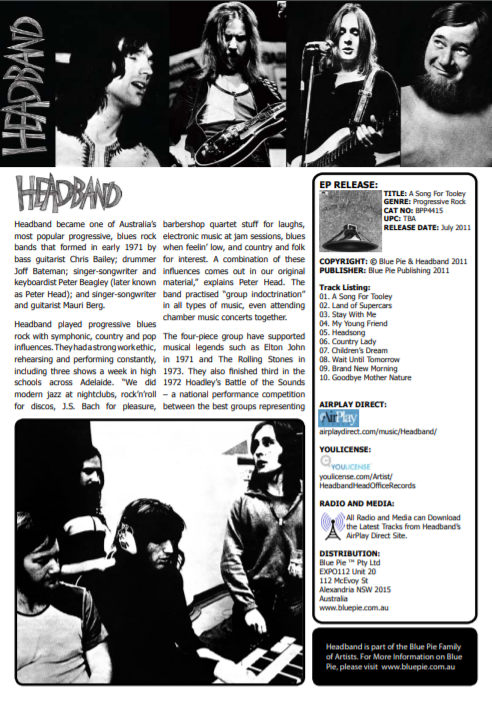